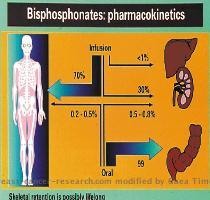 SAN FRANCISCO (GaeaTimes.com)- A latest study released in British Medical Journal has suggested that long-term oral intake of bisphosphonates tablets increases the risk of esophageal cancer. The researchers of the Cancer Epidemiology Unit of University of Oxford who conducted the study, found that people who consumed the medical composition bisphosphonates over a period of five years were twice more likely to be diagnosed with deadly esophageal cancer than any others. Bisphosphonates in general are used in the treatment of bone related diseases like osteoporosis and others. It is one of the most commonly recommended medical treatments for bone ailments.

The research was headed by Dr. Jane Green along with colleagues who collected data of nearly 2,954 patients with esophageal cancer from the UK General Practice Research Database. They also collected data of around 10,641 patients with colorectal cancer, 2,018 patients with stomach cancer. All the patients were diagnosed with the diseases at or above the age of 40. These data were then classified and compared according to controls like sex, age, general practice to get to the observation. The doctors also took into consideration the observation period of the patients who took bisphosphonates. The doctors found that while bisphosphonates intake did not have any effect on stomach cancer or colorectal cancer, it increased the risk of esophageal cancer.

Two out of 1000 people who took bisphosphonates over a period of five years were diagnosed with esophageal cancer in the long run. However, this is not for the first time that the drug has been related to cancer. Two studies published back in May 3, 2007 issue of the New England Journal of Medicine warned about the side effects of bisphosphonates.

Every third Pakistani woman has osteoporosis

ISLAMABAD - One out of every three women over the age of 50 in Pakistan is suffering from osteoporos...

LONDON - Hundreds of thousands of women taking drugs for osteoporosis could be at risk of serious le...

LONDON - Hundreds of thousands of women taking drugs to reverse bone thinning could be doubling thei...

LONDON - A new study has shown that people who take oral bisphosphonates for bone disease over five ...

Study: Drugs to strengthen bones may slightly raise the chances of throat cancer

Long-term use of osteoporosis drug may weaken bones

WASHINGTON - Some types of pills commonly used to treat brittle bones may reduce the risk of...

WASHINGTON - The method of using dental implants to replace teeth lost to an accident, gum diseases ...
Copyright© 2010 The Gaea Times