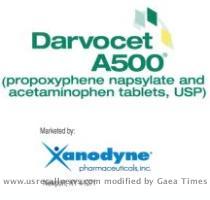 WASHINGTON (GaeaTimes.com)- The popular pain killer, that apparently relieved you from mild to moderate post surgical pains, is no more a boon. The latest studies reveal that Darvocet and Darvon, which has been used by more than 22 million people, is made up of a component called Propxyphene, that increases the risk of cardiac problems. Study shows that it may lead to fatal heart arrhythmias, even if the patient is healthy. Therefore, the FDA decided to recall Darvocet from the market and ban its prescription.

This decision by FDA was taken on Friday afternoon. The decision to recall the drug was taken after the findings of a study were taken into account that said that the side effects of Propxyphene in Darvocet include fatal heart rhythm abnormalities. Therefore, its side effects are more dangerous than the purpose it serves. All those people who have been resorting to this drug, have been asked to visit their doctors as soon as possible to get a replacement for this fatal drug. However, the regular users of Darvocet need not worry as Dr. Gerald Dal Pan, director of the FDA’s Office of Surveillance and Epidemiology, has assured that its side effects are not cumulative in nature and its risk will slowly fade away once the patient terminates its consumption. Darvocet’s recall is not only applicable to only pharmaceutical stores but its recommendation has also been banned.

This drug has been regarded as one of the twenty five most popular drugs, which is used by more than 22 million people. The news rather came up as a shock to most of the people who counted upon it. In February 2009, FDA advisory committee voted 14-12 to recall the drug, which was rejected by the FDA. In July 2009, Darvocet was marketed under “black box” warning, which is a strict label of warning under the federal law.

Melbourne, May 27 (ANI): Singer Mindy McCready, who released a sex tape, tried to kill herself b...
Copyright© 2010 The Gaea Times