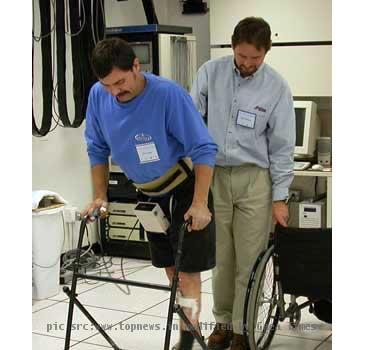 LONDON - A paralysed patient has become the first person to receive a shot of human embryonic stem cells to help him walk again.

The patient has had millions of stem cells injected into the site of his injury in an effort to find a revolutionary cure, according to the US firm carrying out the hugely controversial experiment.

The study has been described by University College London professor Chris Mason as “the dawn of the Stem Cell Age”.

It is likely to reignite a fiery debate over the ethics of the treatment, which uses cells derived from three-to-five-day old fertilised embryos discarded by in vitro fertilisation (IVF) doctors, the Daily Mail reported.

It offers hope to patients suffering from devastating spinal injuries and blindness - the two specific areas being targeted by the US tests.

Researchers are also looking to unlock the potential of stem cells for new ways to treat cancer, Parkinson’s disease and a host of other illnesses.

In animal experiments, paralysed rats were able to walk again after being injected with the cells, but the effect on humans is still unknown.

The landmark test at a hospital in Atlanta, Georgia, by US biotech giant Geron comes after America’s Food and Drug Administration eased restrictions on stem cell research.

Geron president Thomas Okarma said it will take some time to get the results.

The technology was championed by Superman star Christopher Reeve, who received the treatment for his spinal injury after a fall.

MANALI - Heavy snowfall has partially paralysed the construction of the strategically important Roht...

Scars in heart, Mumbai moves on with 26/11 memories

MUMBAI - Mumbai is two years past the day that deeply scarred its heart. The macabre dance of death ...

NEW DELHI - In a new twist to the controversy that led to the resignation of A. Raja communications ...

NEW DELHI - In a new twist to the controversy that led to the resignation Sunday of former communica...

NEW DELHI - Even though the quantum of loss in the award of 2G spectrum has been widely quoted as Rs...

NEW DELHI - Even though the amount of loss in the award of 2G spectrum has been widely quoted by the...

NEW DELHI - In the most serious indictment on the 2G-spectrum scam, India's official auditor Tuesday...

NEW DELHI - In the most serious indictment on the 2G-spectrum scam, India's official auditor Tuesday...

Sibal gets communications and IT portfolio too

NEW DELHI - Human Resource Development Minister Kapil Sibal has been given additional charge of yet ...
Copyright© 2010 The Gaea Times