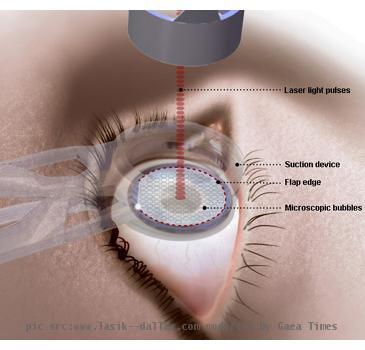 The revolutionary new technique at the Z-LASIK clinic in London boasts a 100pc success rate at correcting short sightedness to 20/20 “normal” levels.

They can read small letters on a vision chart as well from 20ft as most people can from 12.

20/12 is close to the 20/10 physical limit where it is impossible to see better given the number of light sensitive cells in the eye.

At this point, known as “ultimate vision”, a person’s eyesight is twice as good as “normal”.

Research based on 307 patients attending the clinic over the past 12 months showed that 95pc were given vision better than 20/20.

LASIK uses light from a “cool” laser to reshape the front surface of the eye. The newer version of the treatment, Z-LASIK, employs two lasers and computer technology to remove a microscopic layer of corneal tissue in less than 20 seconds.

SEOUL - North Korea blamed South Korea for starting an exchange of artillery Tuesday across their bo...

LONDON - The Vatican has sought to clarify Pope Benedict's remarks on the use of condoms, reported i...

LONDON - A revolutionary technique that could restore sight to the blind and prevent others from los...

LONDON - A stroke victim, who had millions of stem cells injected into his brain in a pioneering att...

LONDON - In a pioneering attempt to repair the damage caused by a stroke, a Briton has had millions ...

Bogota, Nov 16 (IANS/EFE) Thirteen Colombian leftist guerrillas were killed in an airstrike in the s...

Bogota, Nov 16 (IANS/EFE) A Colombian TV host has been arrested in the country's southern Huila prov...

Russian arms dealer extradited to US