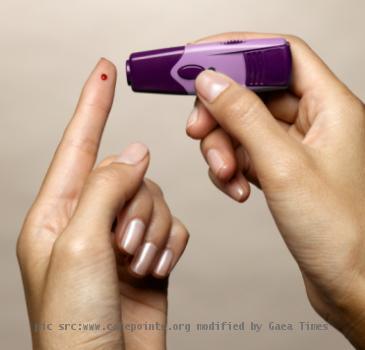 CHENNAI, INDIA (GaeaTimes.com) — Tamil Nadu may be one top health care providing states in India. But a recent study conducted by the Madras Diabetic Research Foundation is quite alarming. According to the study, 42 lakh people in Tamil Nadu are affected by diabetes that amounts to 9.8% people in the total population.

Not only this the study also revealed that 30 lakh people in the state are prone to be attacked with diabetes. The study also found that abdominal obesity in the State was as much as 22.4 per cent in males and 35.3 per cent in females. In addition, the report revealed that 27.8 per cent of Tamil Nadu population have hypertension and 20.1 per cent have hyper cholesterolemia, which were pre-disposing factors to diabetes.

NEW DELHI - India has extended its ban on the Liberation Tigers of Tamil Eelam (LTTE) as it fears th...

The Results of the auctions of 10-year State Development Loans, 2020 for Four State Governm...

NEW DELHI - It was a battle between a magician from the East and a wizard from the West and their sp...

Underprivileged children enjoy a day of amusement in Chennai

CHENNAI - Over 2,000 underprivileged children enjoyed a day of entertainment including a platfo...

NEW DELHI - Swine flu cases have come down significantly with only about 22 cases and one death bein...

Organic farming meet to be held in Gujarat

VADODARA - Organic farmers from all over India will converge in Anand district of Gujarat next month...
Copyright© 2010 The Gaea Times