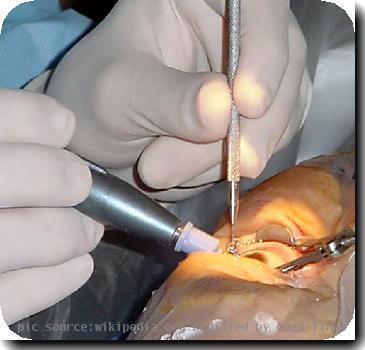 WASHINGTON - In people who have undergone cataract surgery, age-related macular degeneration (AMD) does not appear to progress at a higher rate, says a new study.

The finding defies previous reports that treating one cause of vision loss worsens the other.

“Because both conditions are strongly age-related, many individuals with cataract also have AMD. There has been a long-standing controversy among clinicians as to whether cataract surgery is contraindicated in eyes with non-neovascular AMD. A major concern has been whether cataract surgery increases the risk of progression to neovascular AMD [an advanced form of the disease involving formation of new blood vessels] in eyes at risk of progression such as those with intermediate AMD,” wrote the authors.

Dr. Li Ming Dong, of Stony Brook University School of Medicine, N.Y., and colleagues studied eyes of 108 individuals with non-neovascular AMD who underwent preoperative assessments for cataract surgery between 2000 and 2002.

Photographs of the retina were taken and fluorescein angiography, which uses a special dye to investigate blood vessels in the eye, was performed.

A total of 86 evaluated eyes had non-neovascular AMD before surgery, and 71 had follow-up assessments between one week and one year after surgery.

Neovascular AMD was observed in nine (12.7 percent) of these 71 eyes at one or more follow-up assessments.

Five eyes displayed signs of neovascular AMD at the one-week follow-up point- the size and location of the lesions identified indicated that they may have been present before surgery but not visible due to the opaque lens caused by cataract.

When these eyes and one eye that did not have one-week follow-up photographs available were excluded, the progression rate between one week and one year decreased to three of 65 eyes (4.6 percent).

The rate of progression to neovascular AMD was similar among participants’ other, cataract-free eyes over the same time period (one eye, or 3 percent).

“Our findings suggest that previous reports of the association or progression of non-neovascular AMD to advanced AMD after cataract surgery could be biased with the absence of immediate pre-operative and postoperative fluorescein angiography to rule out pre-existing neovascular AMD or geographic atrophy,” wrote the authors.

“Subtle signs of neovascular AMD or geographic atrophy, even on an angiogram, may be obscured by lens opacity just prior to cataract surgery. In such cases, the neovascular disease or the geographic atrophy may contribute to the individual’s vision loss, and this may erroneously be ascribed to the cataract and contribute to a decision to proceed with cataract surgery,” they added.

The study has been published in the November issue of Archives of Ophthalmology, one of the JAMA/Archives journals. (ANI)

WASHINGTON - A team of US scientists believe laser treatment could make eye operations more safer an...

SYDNEY - A Harvard Medical School professor believes that the day is not far when just popping a pil...

Statin 'could be the new wonder drug'

LONDON - Heart pills are more effective at slashing artery-clogging cholesterol and reducing the...

Vitamins E and C 'have little effect on age-related cataract'

WASHINGTON - A new study has revealed that regular use of Vitamin E and C has little or no effect on...

LONDON - Mae West was too old, too short, too voluptuous, too funny and too independent to be a sex ...

Cheap reading glasses 'can cost you your eyesight'

LONDON - New research suggests that cheap reading glasses might be readily available, but in the lon...

LONDON - A range of useful products for spies including a pen that fired tear gas and an exploding s...

Donors give new meaning to 'eye for an eye'