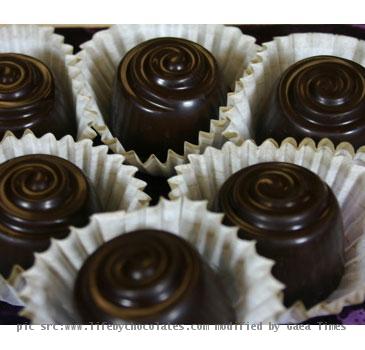 LONDON - One of the ingredients of dark chocolate may help diabetics control high cholesterol levels, it has been claimed.

The Hull University study has suggested that chocolate with high levels of cocoa solids is rich in polyphenols and can reduce the risk of heart disease.

It found that cholesterol fell in a small number of diabetics given bars rich in this ingredient.

A total of 12 volunteers with the type II form of the condition were given identical chocolate bars, some enriched with polyphenols, over a 16 week period.

Those given the enriched bars experienced a small improvement in their overall cholesterol ‘profile’, with total cholesterol falling, and levels of so-called ‘good’ cholesterol rising.

Steve Atkin, lead author of the study, suggested that it could mean a reduction in heart risk.

“Chocolate with a high cocoa content should be included in the diet of individuals with type II diabetes as part of a sensible, balanced approach to diet and lifestyle,” BBC News quoted him as saying.

However, researchers at Diabetes UK said that the message would be interpreted as a ‘green light’ to eat more chocolate.

They pointed out that even bars with the highest levels of cocoa solids would contain high levels of fat and sugar, and could end up doing more harm than good.

Iain Frame, of the health charity Diabetes UK, said he was unconvinced by talk of health benefits.

“On no account should people take away the message from this study, conducted in only 12 people, that eating even a small amount of dark chocolate is going to help reduce their cholesterol levels,” he said.

“The tiny health benefit of this compound found in cocoa-rich chocolate would be hugely outweighed by the fat and sugar content.

“The design of the study is also somewhat unrealistic as they asked participants to eat only around half the size of a normal, dark chocolate bar every day for eight weeks,” he added.

The findings were published in the journal Diabetic Medicine. (ANI)

NEW DELHI - The Comptroller and Auditor General (CAG) report on the 2G spectrum controversy was dist...

Maingear has now unveiled its curtain to mid range PC gamers with the Alt-15 and Alt-17. Just a ...

3 Gadgets to Buy this Black Friday

Black Friday signals the onset of shopping spree for Christmas Day and here we have made a list ...

Are you interested to know who viewed your profile? Is somebody spying on you? Want to get hold ...

26/11 perpetrators should be brought to justice: British minister

BHOPAL - The wrong-doings of some "unscrupulous elements" make it look ugly, but politics is necess...