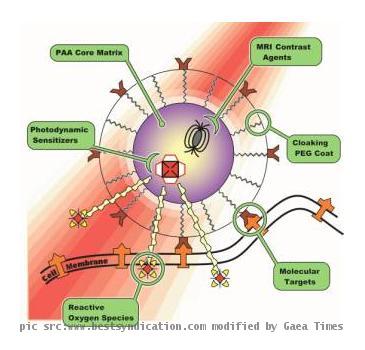 Images from the microscope showed a ring of perforin molecules clustering together to bore a hole in the cell membrane, according to the journal Nature.

Prof Helen Saibil, from Birkbeck College, University of London, who led the Anglo-Australian team, said: “Perforin is a powerful bullet in the arsenal of our immune system - without it, we could not deal with the thousands of rogue cells that turn up in our bodies through our lives.”

Evidence from studies suggests that defective perforin leads to the development of cancers, particularly leukaemia.

The first person to discover that the human immune system could punch holes in target cells was Nobel Prize-winning Belgian microbiologist Jules Bordet, more than 110 years ago.

Prof Saibil said: “From our previous work, we already knew that bacterial toxins, such as the one involved in pneumonia, dramatically change shape to punch holes in membranes.

“We were fascinated by perforin and wanted to know its structure and how that might change in order for it to act as a hole-punching machine.”

Co-author Prof James Whisstock, from Monash University in Melbourne, Australia, said: “Now we know how it works, we can start to fine tune it to fight cancer, malaria and diabetes.”

WASHINGTON - A new study has found that low amounts of albumin in the urine strongly predict faster ...

WASHINGTON - Scientists are using complex computer simulations to shed light on the workings of a ...

LONDON - Scientists have found an old pinworm medicine to be a new lead in the search for compoun...

WASHINGTON - Scientists have identified both common and rare gene variants associated with the eatin...

COPD could be an auto-immunity problem

RAIPUR - Over 200 experts from across the world will meet here to discuss rising cases of "sickle-ce...
Copyright© 2010 The Gaea Times